There are many opinions as to how fast In The Air Tonight by Phil Collins is.

These are the times I measured it.

To me, the coolest thing about the entry of the drums with a savage rawness that makes this song one that “will outlive [me],” as Phil Collins referred to himself and how the song has become more famous than *he*is.

The universality of being able to feel as though something is going to happen, especially at night, with an intensity that in the hands of most writers doesn’t translate. That is what music is for, correct? To express messages of any kind in a way humans have done far before their were any etchings on any cave walls.

But let me not drown (he’d throw me a lifevest if I was drowning, Phil would)

That sounds like it could be a bummer, but it is not!  If someone told Shakespeare that in 600 years parents would still be naming their children Romeo and Juliet [and all the other turns of the English language that dates back to and were formed by the creation and performance of his dramas], would he even have believed it? 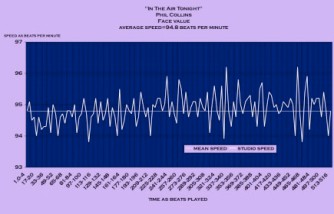 Mr Reiner’s Civil war speeches are public record on which I am so stunned I cannot comment.

They often are not as pretty as some of the haircuts that Senator Gore has sported=, especially in the 1992 fight for the Democratic nomination.

Follow You, Follow Me is a song Genesis wrote for their album AND THEN THERE WERE THREE.  The reason for the title was that The Five member band had lost Peter Gabriel, who, uh, did pretty well on his own – in 1974.  Peter’s family had an illness within and he had no moral choice but to leave the band. In Nicholas Nassim Taleb’s construction of a Black Swan event, Peter Gabriel’s solo career, beginning from the new sound that *popped* out of his first albums, and Peter’s creativity shows no sign of waning.

I have never met Gordon en persona, yet musically, I was lucky enough to hear the song in my wife’s hometown of Philadelphia.  Dr. Lightfoot played the same 12 string throughout most of his show, including TWOTEFR.  My inductive hypothesis that might be garbage  That song, in my opinion could ONLY have been written by Mr Lightfoot. I had to be (or not, I am a huge  Nassim Nicholas Taleb reader, and I know I’m on thin ice here).

Gordon’s monologue continues, “I was flattered when they came to me and asked me to write an elegy like about the incident. When I first played it, I had no idea how they react.  I was as nervous as I’d ever been but I can say that their appreciation is something that nothing in my career could ever surpass.  I am always honored to play this song.”

The Gordon Lightfoot Rule needs a quick example:  after a show in the 1980s Bob Dylan is known to have said something that is key example of TWOTEF rule – “[Sometimes after a show I think about having played a song as Like A Rolling Stone, and I say this not to brag, it just is. I think: did I actually write that song?” Meaning, simply, again, a song that the Black Swan Axiom notwithstanding, had to be. So it is not a rule as a law – it is an opinion in artistic taste. We are most careful here! I know you are if you have read this far.

A lot of women would say at Genesis concerts: “Follow You You, Follow Me” is my favorite song by this band. Men liked it because in the days that we Genesis fans brought girls to shows in the 1970s-2007, because if the women were actually happy at a show.